Today, this subtle, rebellious spirit of her residents still lies under the surface as young families forsake the ubiquitous surroundings of large, suburban cities for a slower pace of life.  Never has it been more evident with the majority of growth realized by self-made, multi generational companies and world-class corporations who call Jones County home. 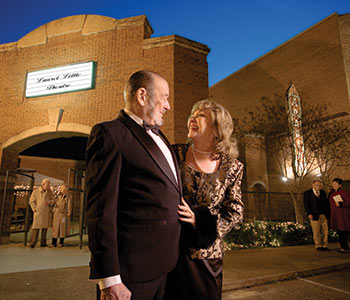 Our Laurel Little Theatre was organized back in August 1961 when four local theatre lovers first got together at the old bowling alley that used to be next door to the Leader-Call newspaper. Marda Kaiser Burton, Mary Anne Sumrall, Ernest Graves and Gene Gandrau hashed out their ideas and quickly called for an official organizational meeting at the old Pinehurst Hotel Coffee Shop. Some of the group that joined in with them at the Pinehurst were well known Laurel names like Jim Gibbon, Annie Ruth Grim, Page Jones Harris, Billy Howard Jr, Billy Lightsey, Ruth Tomlinson, Dot Traweek and Granville Walters.

Their goal was to present Laurel citizens with entertainment and to give would-be thespians a chance to get up on a stage and ham it up for their friends and family. Now five decades later, that’s still our main goal at the theatre. Little did those founders know in 1961 that one day that very group they organized would be performing in the old Arabian movie house just right next door to the Pinehurst Coffee Shop where they were meeting to form the group.