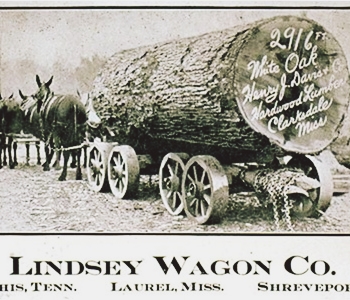 After John Lindsey patented the Lindsey Eight Wheel Log Wagon in 1899, he and his brother, S.W. Lindsey, moved to Laurel, Mississippi where they organized the Lindsey Wagon Company.

While John Lindsey continued with the company as Secretary and Treasurer; S.W. Lindsey was the President and Manager.  John had the brilliance to invent the product, but S.W. had the managerial skills needed to develop an assembly-line process of manufacturing.

An interesting side note is that the Wagon Company is reputed to have always paid their employees in silver dollars.

The concept and the manufacturing were both extremely successful and the Eight Wheel Log Wagon was found all across the U.S.

During World War I, the Wagon Company shipped many wagons to France for the United States Government. After the Armistice, the Company received the following Award of Merit form the War Department:

“The War Department of the United States of America recognizes in this Award for Distinguished Service, the loyalty, energy, and efficiency in the performance of war work by which Lindsey Wagon Company aided materially in obtaining victory for the arms of the United States of America in the War with the Imperial German Government, and the Imperial and Royal Austrian-Hungarian Government.”  Signed Newton D. Baker, Secretary of War.

Besides making wagons for domestic use, the Wagon Company exported wagons to Central and South America.  We know there was an office in Belize during World War II.

After the death of Sam Lindsey Sr. in 1950, the Company ceased manufacture.