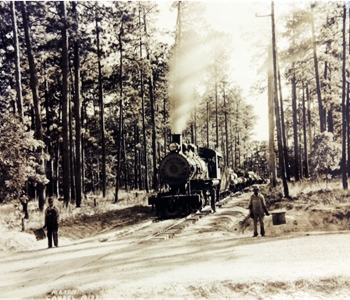 The idea of a railroad running the 196 miles between Meridian and New Orleans was conceived by William H. Hardy. In his autobiography, Hardy explains his dream:

“In 1868, while residing in Paulding, I began a study of future lines of transportation in our reunited county. This study was initiated by the thought of the miserable road over which I had to travel to reach the nearest station, Enterprise, on the Mobile & Ohio Railroad. It was twenty miles from Paulding, over a dirt road which was almost impassable in wet weather.

The war was over, of course, and reconstruction was underway. I felt that the South would soon begin to show it great recuperative power but that if her former position of wealth and prosperity was to be regained it must be through the building of new railroads.

I got out a map of the United States and began to speculate upon a network of new railroads, particularly in the South. Starting with the hypothesis that New York, San Francisco and New Orleans, then the three greatest commercial centers of the country, should be the starting point for all great trunk lines, I drew lines on the map connecting these three cities. The most direct railroad lines between these cities obviously would be the most used and the best paying.

The line I drew on the map from New York to New Orleans, I found ran through Meridian and Jasper County. At that time the Alabama Great Southern Railroad was nearing completion. It ran from Chattanooga, Tennessee, through Birmingham to Meridian. The more I thought of a line from Meridian to New Orleans the more I became convinced of its feasibility as well as desirability.”

The New Orleans & Northeastern Railroad was incorporated on March 16, 1870, and preliminary surveys made in the following two years. All work on the railroad came to an abrupt halt, however, because of a severe depression in 1873.[ii] Even though all funds dried up, Hardy refused to give up. In 1877, Hardy contacted a New York banking firm of Otto Plock & Co. through Montgomery, Alabama, banker Fred Wolf. Plock, in turn, arranged financing of the construction of the NO&NE with Baron Emil d’Erlanger, a German-born financier living in England. Because the old NO&NE charter had expired, a new one was incorporated in 1880 with Fred Wolf as president, and Hardy as vice-president. The Erlanger Syndicate also owned other railroads, namely the Cincinnati Southern, the Alabama Great Southern, the Vicksburg & Meridian, and the Vicksburg, Shreveport & Pacific. These roads, along with the NO&NE, were known as the Queen & Crescent System.

To oversee construction of the NO&NE, which started in 1881, George B. Nicholson was appointed chief engineer of the southern division, extending from New Orleans to the Pearl River, while Samuel Whinery became chief engineer in charge of the northern division from Pearl River to Meridian. Actual construction work started in February 1882, and by August of 1883, trains were running as far south as Hattiesburg, and the track was completed to a point about 26 miles north of the Pearl River. Track was also completed between New Orleans and Pearl River, with the exception of the long bridge over Lake Pontchartrain.[iv] The bridge was the last part to be completed. It was considered the longest railroad bridge in the world, and included 21 miles of wood trestle and two draw spans. Many miles of the approach trestles were later filled in to reduce maintenance. The first regular freight train from Meridian to New Orleans ran on Saturday, November 3, 1883, while the first regular passenger train ran on November 18th.

The Southern Railway acquired an interest in the New Orleans & Northeastern, as well as the other components of the Queen & Crescent System, in 1895. In late 1916, Southern finally purchased total control of the NO&NE by buying out the remaining English-controlled stock. All three lines (CNO&TP, AGS, and NO&NE) maintained their separate corporate identities, but were owned by and operated as a part of the Southern Railway system. The New Orleans & Northeastern was later merged into the Alabama Great Southern on January 31, 1969. Southern Railway merged with Norfolk & Western on June 1, 1982, becoming Norfolk Southern, who continues to operate the line today.