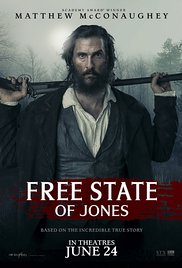 Set during the Civil War, THE FREE STATE OF JONES tells the story of a defiant Southern farmer, Newt Knight, and his extraordinary armed rebellion against the Confederacy. Opposed to both slavery and secession, Knight launched an uprising of poor white farmers that led Jones County, Mississippi to itself secede from the Confederacy, creating a “Free State of Jones.” His relationship and post-war marriage to a former slave, Rachel Knight, effectively established the region’s first mixed-race community. Knight, continued his fight into the post-war period, resisting Klan activity through Reconstruction. His legendary rebellion distinguished Newt Knight as a compelling, if not controversial figure of defiance long beyond the War.

STX Entertainment will open the Free State of Jones on June 24th.

CBS Sunday Morning: The Story Behind “Free State of Jones”

Smithsonian.com: The True Story of the ‘Free State of Jones’

The EDA of Jones County takes no responsibility for the content or accuracy of the above news articles or videos. This content is re-published for the entertainment of our users only. News articles, blogs, and social media posts do not represent the EDA’s opinions nor can we guarantee the reporting therein is completely factual. Please visit the source responsible for the item in question to report any concerns you may have regarding content or accuracy.